Necessity is the mother of invention – Plato

When you do something long enough, you tend to figure out how to do things better as time rolls on. Having run a prominent Southern California artificial turf installation company for some time, we too, were able to try different things along the way. As business owners our desire is to deliver the best product or service in the most efficient way possible. In our case, this meant looking for ways to help our crews do their best and get through their installs in a timely manner. Time is money!

Well, as we identified some of the pains out there in the field, we noticed one particular aspect of the installation that drew the ire of our crews more than any other: installing the border! Whenever our guys would show up to the job site, that was one thing they would surely be looking at how much border do we need to install on this job? If they saw a concrete border all around or nice hard scape that formed the perimeter around the grass, they were relieved. However, when the job called for a good amount of edging or border to be installed, the crew guys knew what that meant. Don’t get me wrong, these guys were the best pure professionals but they knew how much extra work they would have to do and how much it would slow them down! You see, the border they were installing was the common 1 x 4 bender board that is commonly used in many landscape applications as a planter divider/border. It worked well with the artificial turf but required a tremendous amount of labor by virtue of (a) having to dig a trench to sink part of the board and (b) securing the board to the ground by using multiple stakes that had to be screwed in every three or four feet. With the incremental labor cost and, to some degree, the cost for stakes and screws, we knew there had to be a better way.

We started to address this pain. As one of the early landscape artificial turf installation companies around, we were honing different techniques. Going back in time, we initially utilized an edger designed as a paver restraint. We liked its ease of use as it allowed our crews to set the edger right on top of the sub-base without any digging required. This seemed to work but in due time we recognized a couple flaws to this solution. One issue, as it turns out, was a comment by a customer that would spark the move to continue to find a more ideal solution. As he stood there looking at his finished installation the customer wondered out loud why he had to see the edger at all. He had hoped that the edger would in fact be secondary to the turf, with his point being that he had paid all this money for brand new turf and wanted THAT to be the focal point, not some cheap thin black edger he could see!! Point taken. The other issue was the fact that the over edger simply isnt designed for turf edging. The vertical wall is thin and susceptible to snapping off when stepped on. And its actually designed to be used under ground. Not long after this episode we moved on to the bender board as described above, which we incorporated into our installation process for several years until the arrival of the ideal solution, the Wonder Edge!

(See below, example of the edger described above, snapped and looking rather tired) 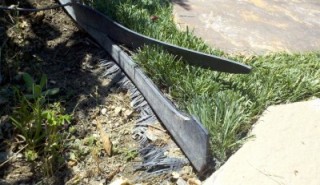 For more information, we created this video that reviews the above mentioned edger products and introduces you to the features and benefits of Wonder Edge. Enjoy and thanks for checking us out.